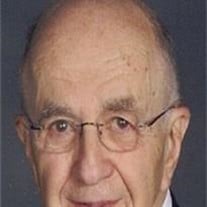 Sylvan Siegler, 85, passed away peacefully on September 4, 2010 with his loving family at his side. Sylvan was a prominent tax attorney for 57 years and an active member of the Kansas City community for more than half a century. A service honoring Sylvan will be held on Tuesday, September 7 at 10:00am at Congregation Beth Shalom, 9400 Wornall Rd., K.C., MO 64114. There will be a private, family burial. Sylvan was born on July 11, 1925 in Kaisersesch, Germany to Bernhard and Amalia Siegler (nee Ermann), who immigrated to the U.S. in 1937 with 12-year old Sylvan and 10-year old Manfred. The family lived first with relatives in Pittsburgh, PA. They then moved to Maysville, MO, where Sylvan attended a one-room schoolhouse, where he was initially placed in a second grade class because he knew very little English. The family then moved to Omaha, NE. Always a quick study, Sylvan graduated, as valedictorian, of his several-hundred student class at Omaha’s Central High School in 1943. Sylvan’s exceptional work ethic was formulated at a young age; he held a number of part-time jobs during junior high school and high school, including delivering newspapers, shining shoes and bagging groceries. He was particularly proud of an essay published in the 1941 edition of the Thanksgiving Day Omaha World Herald entitled “Thankful for Refuge,” that highlighted his appreciation for the gifts of freedom, democracy and opportunity provided in America and won him a $5 prize from the newspaper. “Probably the only thing that could discourage me from writing about all of those things which make me thankful is the tremendous size of such a job,” said Sylvan in the article. In 1943, Sylvan volunteered for the U.S. Army, where he served in Company K of the 405th Infantry Regiment of the 102nd Infantry Division, which participated in the invasion of Germany. Sylvan was awarded the Purple Heart for wounds sustained in battle in November, 1944 and numerous other decorations and medals, including the Bronze Star and Combat Infantryman’s Badge. In April, 1945, he was reassigned to Headquarters Company, 3rd Battalion, to participate in interrogating prisoners of war and communicating with civilians in occupied German areas. He served with Military Government in Bavaria until May, 1946. Following the war, Sylvan attended the University of Nebraska-Omaha and received his J.D. from the Creighton University School of Law in 1950. He was recalled to active duty during the Korean War, where he served as an Army civilian lawyer, near Tokyo, from August, 1951 to November, 1952. Sylvan began his legal career with the Internal Revenue Service, where he served with the Office of Chief Counsel and was Assistant Regional Counsel in charge of the St. Louis office. He was a partner for the past 21 years with Shook, Hardy & Bacon, where he mentored many younger attorneys and enjoyed the firm’s camaraderie and team approach. Sylvan previously spent 27 years as a partner with law firm Margolin & Kirwan. He was Chair of the Taxation Law Committee of the Missouri Bar Association and Co-Chair of the Heart of America Tax Institute. Sylvan was Vice Chairman of the American Bar Association (ABA) Section of Taxation and also served on various committees of the Section. In 2005, Sylvan was presented with the Jules Ritholz Memorial Merit Award “in recognition of outstanding dedication, achievements and integrity in the field of civil and criminal tax controversies.” He has been listed in every issue of The Best Lawyers in America for 25 years. Sylvan, with his friend and law partner, Stan Weiner, developed the succession plan to keep the Kansas City Royals in town after the death of owner Ewing Kauffman. The innovative, tax-structured sale allowed the baseball team to be bequeathed to the Greater Kansas City Community Foundation and directed proceeds from the sale to local charities. “Give more than you get,” was a favorite saying of Sylvan, who supported a variety of charitable and civic organizations and strove to make the world a better place. Sylvan was awarded the Donald Chisholm Award for outstanding service to the community from the Greater Kansas City Community Foundation. He was active with Congregation Beth Shalom, where he was President of the Congregation and the Men’s Club and Co-President of the Couples Club. As a lay leader, he served as the congregation’s Gabbai Rishon and led Friday morning religious services for many years. He also was Vice President and Trustee of the Hyman Brand Hebrew Academy, Vice President of the Jewish Community Center and a Member of the Board of Trustees of the Jewish Community Foundation. Sylvan will be remembered for his love of God and country, service to community, sharp mind and extraordinary sense of humor. He is survived by Merna, loving wife of 51 years, three children (son Mitchell and wife, Elizabeth of San Diego, CA; son Jerry and wife, Stacy of Memphis, TN; and daughter Susan and husband, Moti Rieber of Overland Park, KS) and eight grandchildren (Jacob, Rebecca, Emily, Adam, Hannah, Elianna, Abigail and Joseph), brother, Manfred (wife, Virginia of San Jose, CA), sister, Judy (husband, Gary Liberson of Washington, D.C.),sister-in-law, Carol Lee Seliger, of Houston, TX. and countless relatives and friends. In lieu of flowers, Sylvan’s family would be honored by a donation to either the Siegler Family Fund at Congregation Beth Shalom, 14200 Lamar, Overland Park, KS 66223, the Siegler Family Fund at the Jewish Community Foundation of Greater Kansas City, 5801 W. 115th St., Ste. 104, Overland Park, KS 66211 or the charity of your choice.

Sylvan Siegler, 85, passed away peacefully on September 4, 2010 with his loving family at his side. Sylvan was a prominent tax attorney for 57 years and an active member of the Kansas City community for more than half a century. A service honoring... View Obituary & Service Information

The family of Sylvan Siegler created this Life Tributes page to make it easy to share your memories.