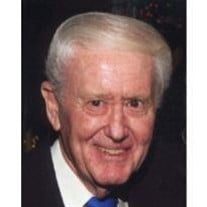 Sylvester Lawrence Sher, 86, beloved husband, father and grandfather, passed away peacefully on Wednesday January 22, 2014. Funeral services will be at 1:30pm Friday, January 24, at The Louis Memorial Chapel, 6830 Troost Ave., with burial to follow in Kehilath Israel Blue Ridge Cemetery. Kindly omit flowers; the family suggests contributions to Kehilath Israel Synagogue or Hyman Brand Hebrew Academy. Syl was born January 18, 1928 in Duluth, Minnesota to Samuel Jack and Libby Holzberg Sher, one of five children. He attended Central High School and the University of Minnesota where he received a degree in journalism. Syl went into Air Force Recruiting after the Korean War and was stationed in Galesburg, IL as a Public Information Officer. Shortly after he went to Belvidere, IL to work on the local newspaper. In 1954, Syl moved to Kansas City where his brother, Abbott, was already residing. He met his future bride, Celia, a year later, and the family celebrated their 56th anniversary last month. Syl had a very successful and fulfilling advertising career for 60 years, and proudly worked his entire adult life, even during his most recent hospital stay. He was partner with a number of agency groups including Sher Jones & Associates. Syl loved his work, and was passionate about communicating with his clients. A long-time member of Kehilath Israel Synagogue, Syl also was a B’nai B’rith Bowler and a Kansas City Kings Gold Coater. He enjoyed participating in sports as a youth and attending professional sports events as a season-ticket holder for decades. More than anything, Syl held family nearest and dearest to his heart, wanting recaps of every grandchild’s activities from games to test scores to dance recitals. Syl was preceded in death by his brothers Ralph and Abbott, and his sister, Ruth. He is survived by his wife, Celia Sher; daughter and son-in-law Allison and Alan Myers; daughter and son-in-law Susan and Dr. Samuel Gutovitz; son Dr. Scott Sher; grandchildren: Rachel and Brian Myers; Cory, Hillary, Jeremy and Joel Gutovitz; Alex, Davi and Zoe Sher; brother and sister-in-law Peyton and Carole Sher, nieces and nephews. Syl lived the happiest of lives, and was devoted to his entire family, his coworkers and friends. In turn, they cherished him greatly and will miss him forever and ever.

The family of Sylvester Lawrence Sher created this Life Tributes page to make it easy to share your memories.