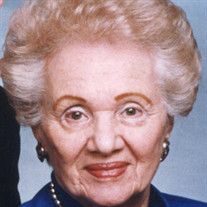 Sylvia Epstein Beiser, 104, of Overland Park, Kansas passed away May 14, 2015 at The Atriums. Funeral Services will be held at 12:30 Sunday, May 17, 2015 at The Louis Memorial Chapel, 6830 Troost Ave, Kansas City, Missouri. Interment will follow at Sheffield Cemetery. Kindly omit flowers; the family suggests contributions to Kehilath Israel Synagogue. Sylvia came to the United States, from Russia, in 1917. In 1934 she married Sam Beiser, the love of her life, and was happily married for 58 years. Sylvia was a homemaker, but also enjoyed working alongside Sam at his grocery stores, Monarch Supermarket, Prospect United Super and Epstein Kosher Foods. Besides the love for her family and friends, Sylvia was an avid card player and continued to play bridge until the age of 103. Sylvia was a member of Kehilath Israel Synagogue and Sisterhood, Congregation Beth Israel Abraham and Voliner and its Sisterhood, life member of Shalom Geriatric Center and Hyman Brand Hebrew Academy Auxiliary. Sylvia had a wonderful life; she was an amazing person with a keen sense of humor. She did not know a stranger and became a friend to anyone she met. People were immediately drawn to her; she was loved by many and will be missed by all. Sylvia was preceded in death by her husband Sam Beiser, daughter, Shirlee Siegel and brothers, Sam Epstein and Isadore (Rachael) Epstein. She leaves behind her son Larry Beiser, son-in-law Victor Siegel, sister, Mary Sedler and sister-in-law Gertrude Epstein. Grandchildren Jeff (Sharon) Siegel, Cyndie (Alan) Jacobs, Pete Siegel, Steve (Vanessa) Siegel and Ryan Beiser. Great-grandchildren Brad and Abby Jacobs, Andrew, Samantha, Skylah Siegel and Riley Siegel. The family would like to thank Lucille Tutera, her incredible team on Assisted Living, and the wonderful caregivers at Continuum Home Care.

Sylvia Epstein Beiser, 104, of Overland Park, Kansas passed away May 14, 2015 at The Atriums. Funeral Services will be held at 12:30 Sunday, May 17, 2015 at The Louis Memorial Chapel, 6830 Troost Ave, Kansas City, Missouri. Interment will follow... View Obituary & Service Information

The family of SYLVIA EPSTEIN BEISER created this Life Tributes page to make it easy to share your memories.