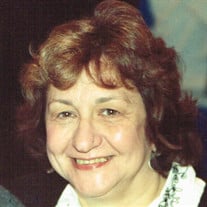 Sylvia H. Kotelov, 81 of Overland Park, KS passed away June 16, 2016. Funeral services will be 11:30am Sunday, June 19, 2016 at Louis Memorial Chapel, 6830 Troost Ave, Kansas City, MO. Interment will be at Kehilath Israel Blue Ridge Cemetery. In lieu of flowers, the family suggests memorial contributions to a charity of the donor’s choice. Sylvia was born March 8, 1935 in Kansas City, MO to Maurice and Anna Horowitz. She graduated from Southwest High School and attended University of Missouri Columbia. Sylvia was co-owner of Party Pleezers along with Corrine Gerson and later worked at Swanson’s and Halls on the Plaza. She was a lifetime member of Congregation Beth Shalom and its Sisterhood. Sylvia was preceded in death by her parents and her husband, Irwin Kotelov. Survivors include her daughters, Nancy (Larry) Carl, Pam (Ted) Glickman; son, Paul (Stacy) Kotelov; brother, Nicky (Shirlee) Horowitz; sister, Helen Brooks and her grandchildren, Steven, Anna and Sara Carl, Ari, Eli and Noah Kotelov and Sydney Glickman and many nieces, nephews and cousins. The family would like to extend their deep appreciation to her loving companions, care givers, and doctors who worked so graciously to insure her comfort.

The family of SYLVIA H. KOTELOV created this Life Tributes page to make it easy to share your memories.