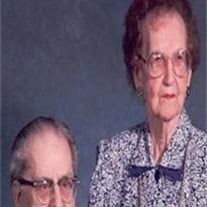 Sylvia Schnaer, 99, passed away Saturday, September 11, 2010 at her home in Overland Park, KS. Funeral services will be at 1:00 pm, Monday September 13 at the Louis Memorial Chapel, 6830 Troost Ave. Burial Sheffield Cemetery. Kindly omit flowers, the family suggests contributions to the Bradley A. Schifman Foundation, 3400 S. Iowa, Lawrence, KS 66046 or a charity of the donor’s choice. Sylvia was born December 28, 1910, (the fourth light of Chanukah), in Denver, CO, to Fannie (Wax) and Jacob J. Greenstein. With her parents and siblings, she moved as a young child to Kansas City, attended Linwood Elementary School and graduated from Central High School in 1928. She was active in the activities and sports at the Jewish Community Center, on Linwood Blvd. and in school activities at Central. Looking for a better life, the family moved to New York where Sylvia worked as a stenographer and secretary. Making many friends there, she met and married Abraham I. Schnaer on September 22, 1935. He was in pharmacy school at Columbia University and after his graduation, they moved back to Kansas City. A few years later they started a family…daughters Ellen Bonnie, Madeline Lee and son Miles Edward. They were married 59 years until Abraham’s passing in 1994. Sylvia was a true Aishet Chayel (Women of Valor). Because of her mother’s failing health, the Schnaer family moved into a house with Sylvia’s parents and she became a caregiver. She believed “if you do the right thing in life you will be rewarded for it.” The home was quite cozy with Sylvia, Abe, their children, Sylvia’s parents and sister, Mary, all living under the same roof. The home also became a refuge for relatives passing through needing a temporary or permanent place to call home. “Let me live in a house by the side of the road and be a friend to man.” Once her children began to grow she became involved in PTA at William Rockhill Nelson School, a Brownie and Girl Scout leader, a Cub Scout Den Leader and did anything else she could do for her children and their friends. She believed you should “do unto others as you would have them do unto you.” She saw to it that her girls had dance and piano lessons and that Miles could participate in sports. They attended Sunday and Hebrew School and all were graduated and became Bar/Bat Mitzvah. They belonged to youth groups and she made sure that all all the groups were welcomed into her home. Sylvia and Abe were long time members of Beth Israel and Voliner Synagogue, both being elected President…he of the congregation and becoming Vice-President for life; she as President of the Sisterhood for eight two-year terms. She was honored as Mother of the Year by the synagogue and honored by Israel Bonds. She was involved in every aspect of synagogue activities…from making decorations for dinner and luncheon tables to preparing food for the famous 83rd Street Monday night bingo games. She wrote wonderful speeches that she delivered at regular Sisterhood functions. She and Abe loved to travel and were fortunate to have been able to take cruises, and sightsee in the U.S. and foreign countries. She was a life member of Hadassah. Upon moving from her home on Kenwood to The Atriums in Overland Park in 1992, Sylvia established the Friday evening Sabbath service for the residents at The Atriums, a tradition that continues. She was preceded in death by her husband Abe, sisters, Ethel Goodman, Mary Greenstein, brother, Sam Greenstein and grandson, Bradley Schifman. Sylvia is survived by her children and their spouses and their families: son and daughter-in-law, Miles and Paula Schnaer, their daughter, Mandi Dow and grandson Maddox, and daughter Allison Schnaer; daughter and son-in-law Bonnie and Herbert Rosen, their daughter, Anne Rosen and son Peter, his wife Ellen and their daughters, Mary and Sarah; daughter and son-in-law Madeline and Robert Schifman, their son Paul, his wife Ellen and their sons Sam, Ben and Eli; son Jim and his wife Lissy and their daughters, Maia and Ellie; and daughter-in-law, Marjorie Beebe, MD and her children, Hannah, Abby, Aaron and Eve Schifman; and sister-in-law Ida Greenstein. Grandma Sib will be remembered by her family and friends as loving, giving and caring. The family wishes to thank Lucille Tutera, Dolly LaTorre and the staff at The Atriums as well as caregivers Marta, Maria, Donna, Charlotte, Kareemah, Amy and Pamela, who all took wonderful care of Sylvia in her last years.

The family of Sylvia Schnaer created this Life Tributes page to make it easy to share your memories.