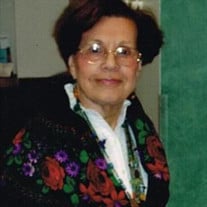 Taisa Simon died August 15, 2021, in Overland Park, KS, at age 92. Taisa was born April 14, 1929 in Gorky, Russia. There she met her first husband, Benjamin Sukiennik, who had fled from Poland and the Nazis with part of his family. In 1947 they returned briefly to Poland, lived as displaced people in Sweden for 5 years, and thanks to President Truman, were able to move to America in 1953. Taisa had a sharp wit and often displayed a lovingly mischievous sarcasm. A speaker of numerous languages, she was a voracious devourer of books, and loved a good mystery - or even a bad one. She enjoyed traveling, and was always up for an adventure, traveling extensively in the United States and throughout the world, including Israel, China, Thailand, Italy, Russia, Mexico, Canada, and Australia. Her first job in the U.S. was in the garment industry, and though English was her sixth language, she obtained her GED while working and raising her children, went to Beautician School, and spent many decades as a hairdresser. Her strong work ethic characterized her throughout her life; she was always one to roll up her sleeves and help, even as she became advanced in years. A long-time member of Bnai Jehudah, she was active in the Sisterhood and loved volunteering at the gift shop. The family also belonged to KI Synagogue for many years. Later in life, she met and married Stanley Simon, and the two of them enjoyed many years together until his death. She was preceded in death by her parents Ivan and Annastasia Yepishana, her younger brother, her son-in-law, Charles Megerman, who became a son to her, and her beloved great-grandson Mikey Coleman. She is survived by two sisters in Russia, children Esther (Charles) Megerman and Hyman (Marlene) Sukiennik, stepchildren Carole (Larry) Smith, Nancy (Patrick) McCahill, Lori (Chuck) Siegel, and many grandchildren and great-grandchildren both in the U.S. and Israel. The funeral will be graveside at Mount Carmel on Wednesday, August 18 at 2 p.m. Zoom link at Louis Memorial Chapel. In lieu of flowers, donations may be made to Michael J. Fox Foundation, Bnai Jehudah, and Magen David Adom of Israel.

Taisa Simon died August 15, 2021, in Overland Park, KS, at age 92. Taisa was born April 14, 1929 in Gorky, Russia. There she met her first husband, Benjamin Sukiennik, who had fled from Poland and the Nazis with part of his family. In... View Obituary & Service Information

The family of Taisa Simon created this Life Tributes page to make it easy to share your memories.