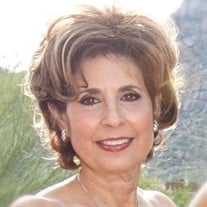 ***NOTE - SERVICE LOCATION HAS CHANGED*** Terry Susan (Russell) Goldberg demonstrated the same grace, courage and determination she brought to living life as she endured, then ended, her battle with Multiple System Atrophy on February 19th, 2015.Until a few months ago, Terry insisted on getting down on the floor to play with her grandbabies; opting to challenge her disease and enjoy each possible moment to the fullest extent. Terry showed love and kindness to everyone around her, embracing their positive qualities only and befriending each individual she met. In addition to her abundance of friends, Terry was a devoted wife, mother, grandmother and sister; to husband Lance, daughters Leigh, Lauren and son-in-law Gavin, granddaughters Sophie Blake, Emilie Austen, Eliza Blakely and Lucy Tovah, sisters Barbara Jo Russell and Ellen Renee Rogers, sister-in-law and brother-in-law Kerry and Ed Hollander, and sister-friend, Marlene Fishman. Terry was preceded in death by her parents, Larry and Ida Pearl Russell, Abe and Edna Goldberg, and beloved niece, Blakely Russell Kay. Terry was a talented cook, loved Native American culture, music, history, hummingbirds and her labelmaker. A talented former kindergarten teacher, Terry connected with children and was committed to furthering their curiosity, intellect and creativity. She attended high school graduation for years to honor her former students’ success. She derived energy and joy from family and friendships – selflessly driven to celebrate milestones in the lives of her endless network. Terry was an advocate, gifting her brain to assist with Multiple System Atrophy research and speaking out in support of Death-With-Dignity. She worked with the organization Compassion and Choices in their efforts to improve care and expand end-of-life choices. To this end, she courageously shared her story as a way to educate others about living with a terminal illness. In lieu of flowers, the family requests you continue Terry’s efforts by supporting Compassion and Choices: Funeral services will be held at 11:00 am Monday, February 23rd at Louis Memorial Chapel, 6830 Troost Ave, followed by burial at Mt. Carmel Cemetery. Donate by mail to Compassion & Choices Gift Processing Center, P.O. Box 485, Etna, NH, 03750-0485, or by calling 800.247.7421. Your tax-deductible donation goes directly toward supporting terminally ill clients and their families, and educating physicians, lawmakers, the media and the public.

The family of TERRY SUSAN GOLDBERG created this Life Tributes page to make it easy to share your memories.