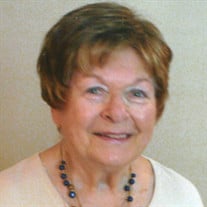 Terry Rose Weissbrod, 98, of Lenexa, KS, passed away Wednesday, February 14, 2018 at Lakeview Village. Graveside services will be at 12 noon, Friday, February 16, 2018 at Rose Hill Cemetery, 6900 Troost Ave, Kansas City, MO. In lieu of flowers, the family suggests contributions to Jewish Family Services, The Temple, Congregation B’nai Jehudah or Lakeview Village Nursing Home. Terry was born June 12, 1919 in New York, New York, the daughter of the late Joseph and Gussie Gittleman. She was a member of The Temple, Congregation B’nai Jehudah. Terry was an avid volunteer and could often be found at The Temple’s gift shop or serving the community at Menorah Medical Center. She also was the co-creator of Parents Without Partners, a successful organization still helping families today. Terry had a long career as a legal secretary. She was a devoted mother and grandmother who had a huge heart and lots of love to give. She valued family to an extraordinary extent. In addition to her parents, Terry was preceded in death by her brothers, Louis Gittleman and Bernie Gittleman. She is survived by her daughter, Linda Sher; sister, Adele Yeddis; grandson, Adam Sher and granddaughter, Renee (Ian) Sher-McMeans.

The family of TERRY ROSE WEISSBROD created this Life Tributes page to make it easy to share your memories.