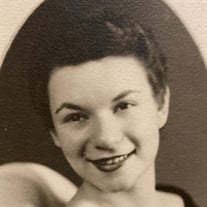 Thelma Lee (Sudvarg) Dolginow, 90, passed away peacefully on October 12, 2020. A private graveside burial will be at Kehilath Israel Blue Ridge Cemetery. Kindly omit flowers. The family suggests contributions to the charity of your choice. Thelma was born on March 14, 1930 in Kansas City, Missouri to Louis and Rose (Spack) Sudvarg. She was a lifelong Kansas City resident. After attending Sanford B. Ladd Elementary School and graduating from Paseo High school in 1947, she received her Bachelor of Arts in English from the University of Kansas City in 1951. She ultimately earned her Master’s degree in Deaf Education and taught preschool for many years to hearing impaired children at Santa Fe Trail School in the Shawnee Mission School District. Following retirement, she became a parent educator for Parents as Teachers in the Olathe School District. Teaching was her lifelong passion as evidenced by the long-lasting relationships she formed with many of her students. She continued to enjoy and take pride in their accomplishments up until the end of her life. Thelma married the love of her life, the late Newton Dolginow, in 1950. They raised their three children in Overland Park, Kansas. She was a devoted mother and grandmother, taking great pride in her children and grandchildren. She was preceded in death by her parents, husband, and a brother, Norman Sudvarg. Survivors include sons, Douglas Dolginow, MD, El Jebel, CO, Scott Dolginow DVM (Patsy Wilmerding), Moab, UT and daughter, Barbara Dolginow Wolock MD (David), Leawood, KS, along with her nine beloved grandchildren, Alexander (Dan Streit), Mackenzie, Morgan, Rachel, and Simon Dolginow, Sam, Charlie, Elizabeth, and Anna Wolock.

The family of Thelma Lee Dolginow created this Life Tributes page to make it easy to share your memories.