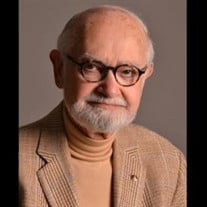 Theodore H. Seligson, FAIA, of Kansas City, Missouri, 90, died on January 4, 2021 of COVID. The son of Harry and Rose Haith Seligson and stepson of Libby Seligson Mezvinsky, Ted was born November 10, 1930 in Kansas City and grew up in Westwood Hills, KS. A Fellow of the American Institute of Architects, Ted was a true Renaissance man: architect, urban and interior designer, professor, fine art consultant, and curator. In his spare time he was a semi-professional violin player, reader of hieroglyphics, historic preservation activist, antiquarian, lover of comics, compulsive teacher, and raconteur. Ted graduated from Shawnee Mission North High School and Washington University. He began his career at Kivett & Myers and moved on to form his own architectural practice. His work received many local and national awards and is highlighted by such projects as Temple B’nai Jehudah, Bartle Hall Convention Center, Missouri Public Service building, Fire Station No. 30, several UMB bank buildings, Maple Woods Community College, Seaboard Corporation offices, and many striking residences. During his career and after retiring from private practice, Ted taught as a Visiting Professor at Washington University and at the University of Missouri – Kansas City for 30 years. Ted is survived by his extended family, a legion of dear friends, peers, clients and students who admired him. Ted was a member of Temple B’nai Jehudah. A private ceremony will be conducted at Rose Hill Cemetery. Memorials may be sent to the Seligson Fund c/o UMKC Foundation at 5115 Oak, AC202 Kansas City, MO 64112. Ted held a fundamental belief that each of us has the ability to make our community and country a better place to live. The Seligson Fund will continue to foster that legacy through public lectures and scholarships for architects and urban planning students at the University.

Theodore H. Seligson, FAIA, of Kansas City, Missouri, 90, died on January 4, 2021 of COVID. The son of Harry and Rose Haith Seligson and stepson of Libby Seligson Mezvinsky, Ted was born November 10, 1930 in Kansas City and grew up in Westwood... View Obituary & Service Information

The family of Theodore H. Seligson created this Life Tributes page to make it easy to share your memories.