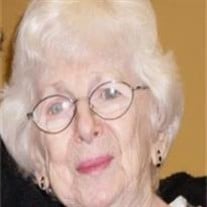 Tillie Hershman Goodman June 20, 1915 – January 1, 2012 Tillie Hershman Goodman of Overland Park, Kansas died at her home on January 1, 2012. She was 96 years of age. A gracious, talented, active woman all her life, Tillie Goodman became involved with the community every place she lived. In Williamsport, Pa. where she resided in the early 1950’s, she was one of the leaders of a public campaign that successfully resulted in the school board offering kindergarten classes. After raising four children, she went to work at Harzfeld’s Metcalf when it opened and stayed until her retirement. That job – in addition to greatly enhancing her wardrobe – provided great experiences and special friends. Long active in the Jewish community, in 1996, she and Sylvia Schnaer began the tradition of Friday Sabbath services at The Atriums. That tradition continues to this day. Her years at the Atriums were wonderful for her and an inspiration to many others. She was also a long-time member of Congregation Beth Torah and a special friend and admirer of the congregation’s rabbi, Rabbi Mark Levin. Born and raised in Philadelphia, Pa., she graduated from Simon Gratz High School and Philadelphia Normal School. Tillie was a life-long learner, reader, musician, baker, puzzle solver, cribbage player and wonderful homemaker. Tillie Hershman Goodman was the fourth of five children of Joseph and Esther Hershman. She was predeceased by her parents, brothers Harry and Nathan and sister Sara Spatz King. A younger brother, Herman Hershman and his wife Rhoda of Cheltenham, Pa., survive her. Tillie married Nathaniel Goodman in Philadelphia, on Thanksgiving Day in 1938 during a blizzard. Their marriage, which spanned 59 years, involved living in Salisbury, Md., Reading, Pa., Williamsport, Pa., Altoona, Pa. and Kingston, N.Y. In 1965, they moved to the Kansas City area and it became their lasting home. In 1995, she and her husband moved to the Atriums. Mr. Goodman died in 1997. Her marriage produced two daughters and two sons. She was predeceased by her daughter Judith Goodman of Seattle, WA. Son Jonathan and wife Jill Adams live in Kansas City. Son Joseph and wife Susan Quinn live in Scottsdale, Ariz. Daughter Deborah Goodman and her husband Roger Agatston live in Monroe, Conn. Mrs. Goodman had four grandchildren: Susan Pola (husband William) of Seattle, and David Moretsky (wife Andrea) of Issaquah, Wash., Hannah Agatston of New York City and Benjamin Agatston of Madison, Wisc. Tillie’s much adored great-grandchildren are Daniela and Nathaniel Moretsky and MacNeal and Jayce Pola. Other than the immediate family, The Goodman’s had no relatives in Kansas City. Later, a cousin, Evan Luskin relocated to Kansas City where he married Andrea Kempf. After the death of her husband Nat, Tillie met Sol Baum – another resident at the Atriums – and was able to find much additional happiness with him for six years. Mr. Baum’s extended family immediately embraced Tillie and drew her into their loving circle. Nieces Debra Rubin and Rhea Salasche and their husbands Ben Rubin and Harold Kaseff and their extended families were especially caring and devoted. As her physical health began to fail, Tillie was blessed by the support of “Team Tillie,” a trio of caregivers. They came to help her but soon became family. Dianne Steen, “chief of staff” (and husband John), provided physical, logistical, emotional and spiritual support – and she and her two associates, Ruthie Williams and Velma Evans did a wonderful job in allowing Tillie to be safe, secure and independent during her last years. The concern and dedication of Lucille Tutera, Dolly Latorre and the rest of the staff at The Atriums provided a caring, loving and supportive environment for Tillie as she aged. Her physician, Dr. Michael Monaco, provided more than just professional, attentive and supporting medical care. His excellent “bedside manner” and many personal touches were noteworthy and very well appreciated. The family respectfully requests no flowers. In lieu of flowers, donations may be sent to Congregation Beth Torah or the Yiddish Book Center located at 1021 West Street, Amherst, MA 01002 (www.yiddishbookcenter.org). Funeral services will be held on Wednesday, January 4, 2012 at 1:00 p.m. at Congregation Beth Torah, 6100 W. 127th Street, Overland Park, KS 66209, with interment at Rose Hill Cemetery following services. Shiva will be at The Atriums at 6:30 p.m., Wednesday and Thursday evenings.

The family of Tillie Hershman Goodman created this Life Tributes page to make it easy to share your memories.