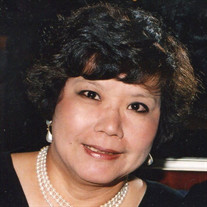 On March 6, 2015, our gentle and beloved Una Chang Strauss lost her courageous battle with cancer. Graveside services will be held at Rose Hill Cemetery at 11:00 am Tuesday, February 10. In lieu of flowers the family suggests that contributions in Una’s honor be made to a charity of your choice. Una was born April 8, 1953, the daughter of Sheng Juang Chiu and Tse Huan Chang. She attended Ming Chuan University in Taipei, graduating in 1972 with a degree in accounting and statistics. She was then employed as a Bilingual Executive Secretary for the American Chamber of Commerce in Taipei. It was there that she met her future husband, Leonard Strauss, who was in Taipei on business. In 1978 Una was the president of the Taipei Secretarial Association, and in 1980 she received a two year Rotary Foundation Scholarship to Kansas City. She received a Bachelor’s Degree in Business from UMKC and in 1983 a Master’s Degree in Business and Investment Finance from Avilla College. She later went into real estate with a local firm and in 2000 formed her own company, USC Properties LLC. Una also completed the prestigious CCIM designation for International Real Estate Marketing from the National Association of Realtors. She remained active in real estate until the onset of her illness. In 1987 Una married the love of her life, Leonard Strauss. Together they enjoyed years of world travel and adventure. They were great patrons and benefactors of the arts and gave generously. They also had an extensive collection of art in their home. According to family members, Leonard’s mother passed the torch of hospitality, grace and generosity to Una. She carried it with sweetness, love and elegance. Una was a lover and creator of beauty. She was a gracious hostess – her gatherings were always known for their ambiance, gourmet food and elegant floral arrangements. Una represented the very best of two cultures – the quiet grace and gentleness of the Chinese and the outward openness and love of people from the American way of life. She combined a maturity, sophistication and wisdom with the energy and freshness of youth. Una was preceded in death by her beloved husband, Leonard; her parents; brother: Wei Chang; brother-in-law: Norman Strauss. Her surviving family includes two step-daughters: Susan Feld Strauss and Leslie Ann Strauss; brothers: Ning Chang, Hsin Chang, Yi Mei Chang; sisters: Ling Mei Chang, Hsin Mei Chang, Tai Mei Chang, Xue Mei Chang; brother-in-law: Eugene Strauss; two granddaughters; one grandson; and ten nieces and nephews.

On March 6, 2015, our gentle and beloved Una Chang Strauss lost her courageous battle with cancer. Graveside services will be held at Rose Hill Cemetery at 11:00 am Tuesday, February 10. In lieu of flowers the family suggests that contributions... View Obituary & Service Information

The family of UNA CHANG STRAUSS created this Life Tributes page to make it easy to share your memories.