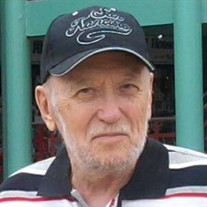 Vladimir Zaslavskiy, 77, of Overland Park, passed away on Saturday, July 9, 2017. Funeral services will be held at 11:00 A.M. Tuesday, July 11, 2017 at The Louis Memorial Chapel, 6830 Troost Ave. followed by burial at Mt. Moriah Cemetery. In lieu of flowers, the family suggests that contributions be made to the Lung Cancer Research Foundation at https://www.lungcancerresearchfoundation.org/ or mail to:155 East 55th Street Suite 6H, New York, NY 10022. He was born December 7, 1939 to the late Ilya Zaslavskiy and Anna Kheyfets in Odessa, Ukraine. He studied electronic engineering at the Odessa Polytechnic Institute where he attained an M.S. He met his wife, Florida Zaslavskaya, when they were both age 18 and they married on the same date four years later on April 6, 1962. Vladimir worked as an electronic engineer, designer, and innovator until he retired in 2008. He never stopped being curious and inspired by the world around him. He was dedicated to his work and was respected by all of his peers and colleagues. Vladimir engaged in a lifetime of tinkering and invention. He loved to fish, play chess, and to philosophize with his friends and family while doing so. He was a voracious reader and radio listener. Before immigrating to the United States from the former Soviet Union, he would frequently seek out censored information in order to learn more about the outside world. He helped his family escape communism and brought them to their new home. Vladimir was eternally dedicated to his family and sacrificed whatever he could to ensure their safety, happiness, and prosperity. He is survived by his wife of 55 years, Florida Zaslavskaya, and his daughter, Yelena Zaslavskaya, both of Overland Park, KS, and also by his grandson, Alexander Sokolovsky, of Providence, RI.

The family of VLADIMIR ZASLAVSKIY created this Life Tributes page to make it easy to share your memories.

Vladimir Zaslavskiy, 77, of Overland Park, passed away on Saturday,...