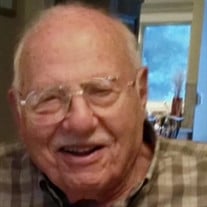 Anyone who knew him always came away feeling happier spending time with him. He was a favorite among caregivers, waitresses and new acquaintances at Brookdale Overland Park. Warner Bergh was someone you wanted to be around thanks to his infectious optimism, warm smile and wit. He lived a totally rich life – experiencing true ups and downs during his blessed 98 years. Born in Berlin on Aug. 14, 1923, his childhood was shattered when his father was imprisoned in a Nazi concentration camp – Sachsenhausen. His family was lucky enough to escape Nazi Germany in 1938, traveling to Shanghai, among 18,000 Jewish refugees who spent the war years living in a ghetto. After 10 years in China, the Silberbergs fled again, this time to the United States, avoiding China’s Communist takeover. In January, 1949, Warner and his parents arrived in Des Moines with barely a thing to their name, but relieved to be back to western culture. Through a personal ad, he connected with, and fell in love, with his beloved “Shnooks,” Esther. They were married 62 years. He spent six decades in Des Moines, where he raised a family, found his niche managing in discount stores and lived a selfless and content life. He never complained. He appreciated anything anyone did for him. His life’s mantra was: “Relax!” He left any encounter with these words: “Stay well.” However, there was so much more to this man. While his formal education stopped at age 14, he was a philosopher. He had a way with words – spoken and written. He had an incredible memory for dates, historical events and geography. He was a human calculator. He was extremely witty. But most of all, he was warm-hearted, compassionate and an excellent, husband, father and eventually, proud Opa and grateful great-Opa. Everyone he met found him so interesting. When not working, he always had a creative project going. An avid stamp collector, bonsai enthusiast, tropical fish lover, model train collector, chess player, history buff, soccer fan, mosaic and furniture creator, lover of classical music, and swimmer, he also made time for worldwide travel with wife Esther. In later years, with his wife, they served the Des Moines community as volunteers helping the elderly, recent immigrants and anyone less fortunate. Always a great story teller, he used this talent to educate children and adults about the Holocaust. In 2013, to be with family, he and Esther moved to Kansas City, where they remained active. Warner died on Sept. 18, 2021, almost two years after his wife. Adoring family members include daughters Jackie (Phil) Hermanson and Evie (Bob) Grant, grandchildren Elena (Ben) Heisler, Seth (Becca) Hermanson, Roni Grant (fiancé Ben), Jonathan Hermanson (fiancé Hannah) and Ally Grant; and great grandchildren Micah, Ezri and Anabelle. A heartfelt thank you to the many caregivers and Vitas Hospice, who supported not only Warner, but his family. In lieu of flowers, the family suggests donations to Jewish Family Services, the Midwest Center for Holocaust Education, or to a charity of your choice.

Anyone who knew him always came away feeling happier spending time with him. He was a favorite among caregivers, waitresses and new acquaintances at Brookdale Overland Park. Warner Bergh was someone you wanted to be around thanks to his infectious... View Obituary & Service Information

The family of Warner Julius Bergh created this Life Tributes page to make it easy to share your memories.

Anyone who knew him always came away feeling happier spending...