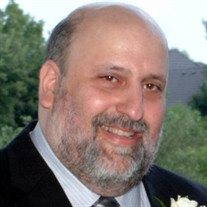 Warren Sander, 59, of Collierville, TN, died Saturday, January 13, 2018 following a battle with cancer. Funeral services will be held at 11:00 a.m. Wednesday, January 17 at Louis Memorial Chapel, 6830 Troost Ave. Burial Kehilath Israel Blue Ridge Cemetery. Kindly omit flowers; the family suggests contributions to the Midwest Center for Holocaust Education or a charity of one’s choice. Warren was born April 22, 1958 to Shirley Sander and the late Sam Sander, in Kansas City, MO. He graduated from Center High School in 1976. He attended the Georgia Institute of Technology (Georgia Tech) and received a Bachelor’s degree in Computer Science from the University of Missouri – Kansas City. Warren began his professional career at Burns & McDonnell in Kansas City before moving to the Boston area where he worked for Digital Equipment Corporation, Compaq, and Hewlett Packard. He subsequently moved to Memphis, TN and was working for Federal Express doing web analytics until his death. He had a love for movies, and would go almost every Saturday to see any new release from that week. A lover of science fiction, he always had a paperback book in his back pocket to read to pass the time. His greatest love, however, was a seat at the poker table. He would annually travel to Las Vegas to meet up with his friends at BARGE, the Big August Rec. Gambling Excursion. Warren was preceded in death by his father, Sam Sander. He is survived by his mother Shirley Sander, sister Mindy Forman, brother and sister-in-law Jeff and Linda Sander, all of Overland Park, niece and nephew Jennifer and Michael Kirschenbaum of Long Island City, NY and nephew Grant Sander of Overland Park, and loving aunts, uncle, and cousins. The family would like to thank Warren’s physicians and nurses at West Cancer Center in Germantown, TN, his caretakers at Signature Healthcare at St. Peter Villa in Memphis and especially his FedEx team who were very important to Warren and treated him like family.

The family of WARREN SANDER created this Life Tributes page to make it easy to share your memories.