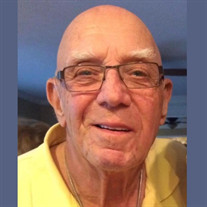 William “Bill” Kessler, 87, died peacefully in his Overland Park home on February 24, 2021. Bill was born on June 10, 1933. The son of Phil and Jean Kessler, he grew up in Kansas City, Missouri. Bill served as a supply sergeant in the Army during the Korean War. In the '50s, he moved to California where he met his first wife, Eve. A year later, they moved to Kansas City where they started a family. In addition to their three children, they were foster parents to several others. Bill started his career in sales and eventually became an entrepreneur. Combining his love of woodworking and building, he started Kessler Construction Company. Volunteering was important to Bill. He was an Eagle Scout and served as a leader for Troop 2 at The Temple, Congregation B’nai Jehudah. He spent many years as a Shriner, involved in several of the Abdallah Shrine Temple’s activities, including the CHEF de SHRINERS, the Tin Lizzies (the drivers of miniature cars in parades) and musical performances. One of his favorite organizations was the ROMEOS (Retired Old Men Eating Out), a social group that met every Friday. Bill and his family enjoyed weekends at the Lake of the Ozarks for 25 years. He loved fishing, boating, and spending time with his children and grandchildren. He was a strong, compassionate, and inspiring role model. He never knew the extent of the impact he had on others, especially on his children. His passing will leave a huge hole in many people’s hearts. Bill is survived by his wife, Charlotte, and his devoted children: Perry Kessler (Lisa), Lisa Church (Jon), and Kim Brown (Steve); and grandchildren: Tyler and Brent Church; William, David, Michael, and Daniel Kessler; and Molly and Justin Brown. Bill was a member of Temple Beth Torah. In lieu of flowers, the family suggests donations to the Abdallah Shrine Temple or the charity of your choice.

The family of William "Bill" Kessler created this Life Tributes page to make it easy to share your memories.