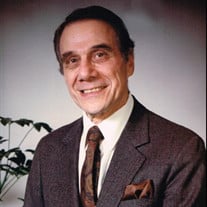 Sol Koenigsberg, age 96 of Leawood, KS died on December 24, 2020. He was born in Detroit, Michigan on December 11, 1924. A private family graveside service will be held on Sunday, December 27, 2020 at Rose Hill Cemetery. In lieu of flowers, memorial contribution may be made to the Jewish Federation of Greater Kansas City or KC Shepherd's Center. Sol graduated from Detroit’s Cass Technical High School’s music department in 1943. He enrolled at Wayne University in Detroit as a music major. His studies were interrupted by his World War II service in the Navy where he served in the Pacific Theater aboard a destroyer escort as a sonar man. His ship screened larger vessels and was engaged in combat until it was hit by a kamikaze plane off Okinawa. The ship then limped its way to the Philadelphia Navy Yard. While stationed there he met Naomi Estes of Philadelphia. She died of cancer after only three years of marriage. Following his discharge from the Navy, he returned to Wayne U., majored in psychology, and graduated in 1949. Sol received his master’s degree in social work from the University of Pennsylvania in 1952. His first-year field work assignment was at the Jewish Family Service of Philadelphia where he helped with the resettlement of Holocaust survivors. He returned to Detroit where he continued to help survivors at the Jewish Family Service there. Sol returned to Philadelphia to complete his training. He was accompanied by his wife, Rosette, a beautiful French Jewish survivor of the German occupation of her country whom he married while back in Detroit. They were in a loving marriage for 62 years. Rosette died on January 9, 2014. Sol’s second-year field placement was at the Veterans Administration Hospital in Wilmington, Delaware, where he was trained as a psychiatric and medical social worker. He was asked to return to Detroit to supervise the Jewish Family Service’s Aging Department. After serving in that capacity for several years, he was recruited by the Jewish Federation of Detroit to join its staff. After five years, he accepted the position of assistant director of the Jewish Federation of Milwaukee in 1962, in 1968 he assumed the executive directorship of the Jewish Federation of Greater Kansas City. He served in that position until his retirement as Executive Director Emeritus in 1989. He wrote a book about his Kansas City experience entitled “Challenges and Growth” where he wrote about his successes in helping the Jewish community achieve more sophistication as symbolized by yearly increased giving to the Federation annual campaign, promoting the Jewish Community Foundation and coordinating the building of the Jewish Community Campus, Federation project. Sol was named as one of the living legends of the community by the Kansas City Jewish Chronical. Sol served as president of the Detroit Association of Social Workers (now the National Association of Social Workers). He was a founding member of the Association of Jewish Communal Professionals and became its president. He was an editor of the Journal of Jewish Communal Service, chaired the Intermediate Cities Executive group and served as the membership chairman of the World Conference of Jewish Communal Service. After his retirement he was a member of the board and then president of Shepherd’s Center that provides service to the elderly. He was a chairman of an allocating committee of the United Way of Greater Kansas City. He played the clarinet with Overland Park Civic Band for several years. Both Sol and Rosette were injured in the collapse of the skywalk at the Hyatt Hotel on July 17, 1981. Sol joined the effort to build a memorial to those killed and first responders that now stands near Children’s Mercy Hospital, 22nd and Gillham Road, sculptor by Rita Blitt. Following the death of Rosette, Sol became a resident of Village Shalom. He had lectured at their annual Village Shalom University and conducted a weekly session on current events. He also presented musical programs to those in assisted living, villa residents and memory care. His occasional letters to the editor and columns were published in the Jewish Chronicle of Greater Kansas City, the Kansas City Star and in some magazines. Sol was preceded in death by his parents, Charles and Pearl Koenigsberg; brother, Hy and his sister, Alice Ostrow. Sol’s son, Michael, died November 19, 2017. He is survived by his daughter, Beth, nieces, nephews and cousins in several US states and France.

Sol Koenigsberg, age 96 of Leawood, KS died on December 24, 2020. He was born in Detroit, Michigan on December 11, 1924. A private family graveside service will be held on Sunday, December 27, 2020 at Rose Hill Cemetery. In lieu of flowers,... View Obituary & Service Information

The family of Sol Koenigsberg created this Life Tributes page to make it easy to share your memories.